A Greek American Character and Ethnic Whiteness in Film 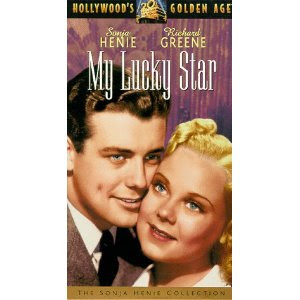 My research on how My Big Fat Greek Wedding constructs Greek ethnicity led me to an unexpected find. It is about a minor Greek character in My Lucky Star (1938), who makes an appearance to illuminate the proper Americanness of the movie's star, Sonja Henie, in the role of a Norwegian immigrant.
Here is the description of the relevant scene by film critic Diane Negra, effectively capturing an instance of internal differentiation within ethnic whiteness at the time. The function of the (unassimilated) Greek character is to construct a normative Americanness, embodied by a northern European American:
“[Sonja] Henie’s stable national status is suggested by a variety of incidents in her films, including several in My Lucky Star. No explanation is provided by the film for why this young Norwegian woman has come to the US. Nevertheless, her role as the good immigrant is stressed in bits of comic business such as a scene in the college sweet shop where Chris and her male companion are aggressively urged to order ice cream with pistachio from a Greek proprietor who pitches the nuts as a product from his homeland, and is nearly apoplectic when they decline, shouting, ‘It’s people like you what’s wrong with this country!’ This minor character’s comic and hysterical assertion of his national interests is meant to contrast with Chris who is unencumbered by such concerns and can ideally pitch American-made women’s clothing” (Off–White Hollywood: American Culture and Ethnic Female Stardom, 2001:99).
For those interested in the representation of Greek Americans in American cinema, there is now a newly created filmography (in progress), available at,
www.lsa.umich.edu/UMICH/modgreek/Home/_TOPNAV_WTGC/Media%20and%20Culture/GkAmFilmsJune_10.pdf
Posted by Yiorgos Anagnostou – Γιώργος Αναγνώστου at 6:10 PM 0 comments 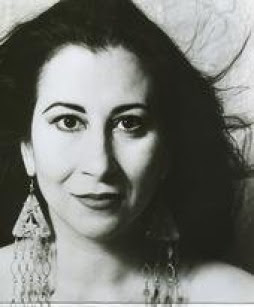 On October 1st 2009, The National Herald commenced a biweekly column on Greek music. Interweaving historical, cultural, and anecdotal information, it is penned by vocalist Grigoris Maninakis, an insider of New York City's Greek musical scene. A popular performer both in Greece and Greek America, the author also works to preserve Greek music in the United States (gmaninakis.com/Site/Welcome.html).
Two columns are of direct interest to Greek America.
Entitled "Cafe Aman America: A Musical Tribute to the first Greek Immigrants in America" (December 12, 2009), the first addresses the circumstances leading to the production and reception of the CD "Cafe Aman America," a fascinating tribute to early U.S. Greek immigrant music (listen, music-bazaar.com/main.php?page=artist&id=3480 and see, youtube.com/watch?v=q7bVyPn8NZM).
The second column, entitled, "Musical History: N.Y.'s Music 'Boxes'–the Memorable Greek American Boites" (November 26, 2009), takes us to the golden boite era in Greek NYC in the 1980s and early 1990s, now a phenomenon of the past.
Any recollection of NYC's Greek musical scene must of course include Annabouboula, a pioneering Greek American band. With the unparalleled Anna Paidoussi as a vocalist (image above), the group combined Greek popular music with funk and psychedelic elements, producing an electrifying syncretic beat.
I find the band's performance on Nightmusic riveting:
youtube.com/watch?v=dVeHHpYlJ14in
The trio was also featured on a BBC documentary,
youtube.com/watch?v=6vX2_qYQhiU&feature=related
Also, for a solo performance by Anna Paidoussi (2004) see,
youtube.com/watch?v=SGtx6UAmLFY&feature=related
What happened to this group? How was its cultural border-crossing received by various audiences? What could we learn from the life stories of its members? What does its history tell us about Greek America?
One only hopes that ethnomusicologists and ethnographers will show interest in this fascinating band as well as the overall Greek musical scene in NYC. This is rich material begging the attention of researchers.
Posted by Yiorgos Anagnostou – Γιώργος Αναγνώστου at 6:16 PM 2 comments

Arizona's new controversial immigration law (SB1070) was recently debated in the Greek American newspaper The National Herald (NH). The following, originally printed in the NH on June 25, 2010, is my contribution to the debate.

Arizona's new immigration law, SB1070, allows police to check the immigration status of people who are lawfully stopped and deemed “reasonably suspicious” for being illegal. The question of whether SB1070 can be enforced in a race-neutral way or will be used to profile Hispanics and Latinos is one of the most volatile issues raised by this law. This explosive issue is now debated in the National Herald. In a letter to the newspaper, a number of University professors and educators took issue with Constantine Scaros’ insistence on advancing one particular interpretation of the law while unreflectively dismissing rival interpretations. He keeps insisting, instead, that SB1070 is race-neutral. Just read the law, he urges the public, and the truth will shine: SB1070 has nothing to do with racial profiling.

This may appear to be the case, particularly in view of the last-minute amendment, section 5D, passed by the Arizona legislature. It says, “A law enforcement official or agency of this state or a county, city, town or other political subdivision of this state may not consider race, color or national origin in implementing the requirements of this [law] except to the extent permitted by the United States or Arizona Constitution.”

But what does the last phrase, “to the extent permitted by the United States or Arizona Constitution,” mean? As I am not a scholar of immigration law, I rely on an array of legal experts to understand the complexity of SB1070. In view of the debate in the National Herald, I would like to share with readers a particular interpretation offered by University of Arizona law professor Gabriel ‘Jack’ Chin. For Chin, the last phrase of the amendment constitutes a huge loophole, given the U.S. Supreme Court’s ruling in 1975, in a case called United States v. Brignoni-Ponce (422 U.S. 873, 886-887). “According to the Supreme Court, the U.S. Constitution allows race to be considered in immigration enforcement: ‘The likelihood that any given person of Mexican ancestry is an alien is high enough to make Mexican appearance a relevant factor’” in immigration law enforcement. Similarly, “The Arizona Supreme Court agrees that ‘enforcement of immigration laws often involves a relevant consideration of ethnic factors.’ State v. Graciano, 653 P.2d 683, 687 n.7 (Ariz. 1982) (citing State v. Becerra, 534 P.2d 743 (1975)).” (For the full complexity of SB1070 see, www.azdatapages.com/sb1070.html, which includes the full text of SB1070 and professor Chin’s annotations).

A thorough scholar, Chin offers a number of caveats. “There are many open questions,” he cautions. “Most of the cases allowing racial profiling involve Border Patrol officers enforcing federal immigration law. It is not clear that the U.S. Supreme Court or Arizona Supreme Court will extend these rulings to state officers enforcing state immigration law, or to state officers who have general law enforcement responsibilities.”

It is open, in other words, how the U.S. Supreme Court or the Arizona Supreme Court will proceed. Yet Chin is unequivocal regarding the link between the law as it stands and racial profiling. “I am deeply surprised,” he says, “that anyone construes this law to prohibit racial profiling. If it did, the legislature would have provided that the police ‘may not consider race, color or national origin in implementing the requirements of this subsection except to the extent permitted by the United States or Arizona Constitution.’ The fact that the last clause is part of the law invites profiling followed by legal tests of whether it is appropriate in particular cases. If the legislative and Governor in fact intended to forbid the use of race, color or national origin, they should delete the last clause. This would take race out of the law, and be a significant improvement—but given the vast discretion exercised under the reasonable suspicion standard race would remain in the air.” Obviously, we witness here a well-reasoned argument connecting SB1070 with racial profiling, not a “misplaced mass hysteria,” as Scaros charges of the critics of the law.

I refer to Chin’s interpretation in such detail because it helps us clarify a number of contested points in the debate. First, we realize that the mere reading of SB1070 does not provide access to a transparent truth, as Scaros would have us believe. There are rival interpretations of the law. Second, we come to recognize a crucial fact in the debate. This fact is that we have publically available an authoritative legal interpretation countering Scaros’ position. Moreover, this alternative interpretation is accepted as legitimate by numerous respected scholars and institutions.

This is precisely why the professors and educators took issue with Scaros for summarily dismissing the view that SB1070 entails racial profiling. “Throngs of protesters have condemned SB1070 as being an excuse for ‘racial profiling,’ as it will give police officers the excuse to harass anyone who looks Hispanic. Rarely have I observed such a high degree of collective fallacy,” Scaros wrote. The letter by educators called on Mr. Scaros and others to be as judiciously inclusive as possible in anticipating the effects of the new Arizona law, given the vast discretion it allows police to exercise, precisely because the law’s implementation may have politically and socially explosive consequences.

Finally, let me take a moment here to clarify the meaning of racial profiling so that the term will not be inappropriately used and confuse the discussion. We live in a racialized society where individuals are indeed classified in racial terms on the basis of certain physical markers. Recognizing certain individuals as African Americans or Asian Americans is called racialization, a practice distinct from racial profiling. Unlike everyday racialization, racial profiling is a practice of the state that entails state surveillance of a targeted group, the exercise of state force, and, often, political exclusion. In other words, asking a neighbor for her baklava recipe because she "looks Arabic" is different from law enforcement’s targeting her as a potential suspect because she "looks Arabic."