Honoring the Terrible Loss – One hundred years since the Ludlow Massacre 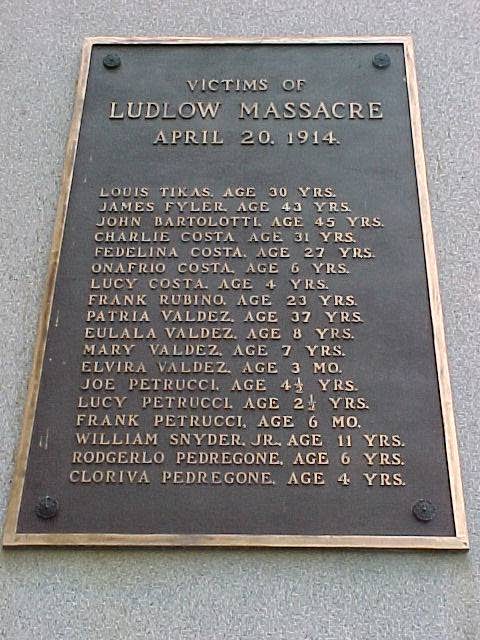 Why the Bloodiest Labor Battle in US History Matters Today
http://www.thenation.com/article/179144/why-bloodiest-labor-battle-us-history-matters-today

Posted by Yiorgos Anagnostou – Γιώργος Αναγνώστου at 12:00 AM 0 comments 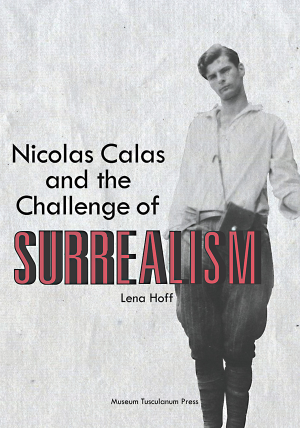 ‘Palikari,’ a Greek migrant’s story destined to echo in eternity


By Nick Malkoutzis
It could have been a scene from Orthodox Easter anywhere in Greece: Relatives, friends and co-workers gathering around the fire to roast lamb, share a drink and have a dance. This particular festive scene, though, is taken from a Colorado coal miners’ colony on April 20, 1914, at the height of the longest workers’ strike the USA had ever seen.

Within hours of the festivities, around 20 people lay dead after an onslaught by the Colorado National Guard. They included union leader Louis Tikas, a Greek immigrant, who was beaten and then shot in the back.

For decades Tikas’s exceptional story of fortitude only existed within the contours of broader accounts about the Ludlow Massacre. A century later, a documentary called “Palikari” made by two Greeks, director Nickos Ventouras and researcher Lambrini Thoma, seeks to build on the single account of Tikas’s journey from Cretan migrant to working man’s legend and create a comprehensive account of this gripping tale.

The idea for the project came in 2007 when Ventouras and Thoma were preparing to trace Jack Kerouac’s journey across the USA, as told in his classic book “On The Road,” for a magazine article. During the research, Thoma came across an article about Louis Tikas and the pair decided to stop off in Colorado to find out more.

“At the time, to get to see Tikas’s grave, we had to climb over a fence,” Thoma tells Kathimerini English Edition. “The cemetery wasn’t open, there wasn’t a sense of memory or that people may travel from afar to visit the place. It was a local matter. But we saw that it was still alive, people hadn’t forgotten the story and they were making an effort to keep it alive.”

After meeting with folk singer Frank Manning and Colorado’s poet laureate David Mason, Ventouras and Thoma were convinced that Tikas’s story needed to be told to as wide an audience as possible.

Their work was cut out for them by Zeese Papanikolas, a Greek-American author who was the first to delve into Tikas’s past, elevating him from just a bit-part player in a cast of hundreds involved in the events in Ludlow to one of the main characters in this momentous event in American labor history. His 1991 book, “Buried Unsung,” transformed Tikas into a compelling historical figure, who left Greece as Ilias Spantidakis early in the 20th century and established himself as a mainstay of the Greek community in southern Colorado before leading a 14-month strike that pitted poorly paid and badly treated miners against the Colorado Fuel and Iron Company and chief mine owner John D. Rockefeller Jr.

“America knew the story of the Ludlow Massacre but only found out about Louis Tikas relatively recently,” says Thoma. “We owe this to Zeese Papanikolas, who in the pre-Internet age and starting with the memories of just two people created a seminal work of oral history. He dedicated many years of his life trying to uncover who Louis Tikas was. We all owe him a debt of gratitude for his work. He certainly made things much easier for us to make the documentary.” 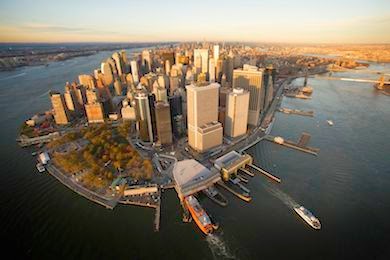 From the Archive: “A Greek Author Travels to the Country of the New Myth”: The Voyage of Elias Venezis to America in 1949

Author: Natalia Vogeikoff-Brogan: This essay comprises the text of a talk that I presented in the Cotsen Hall auditorium of the American School of Classical Studies at Athens (ASCSA), April 9, 2013, at an evening devoted to novelist Elias Venezis, whose papers reside in the Archives of the Gennadius Library. The text was also published (in Greek ) in the “Athens Book Review,” in an issue dedicated to Venezis. Since my essay discusses two of Greece’s most important novelists’ impressions from their journeys to America, I thought that it also deserved to be published in English and be made available to an American audience (here, I must thank my friend and former colleague Stefanie Kennell for her wonderful translation). For half of my life I have studied and worked in a Greek-American environment; there interest lies in examining how foreigners (usually described as philhellenes) perceive(d) Greece, and it is rarely discussed, at least in the broader community of the American School, how Greeks experienced America at critical times, such as in the first decade following WW II. The two authors, Elias Venezis and Yiorgos Theotokas, traveled in America during the period of the Marshall plan and the beginning of the Cold War, just before strong anti-Americanism began developing in Greece. For both, the voyage to America was a journey to a mythical land — as implied by the title of this essay, which is drawn from the title of a talk (“Ένας Έλλην συγγραφεύς στη χώρα του νέου μύθου”) that Venezis delivered at the Greek American Cultural Institution in 1950, immediately after his return from America. 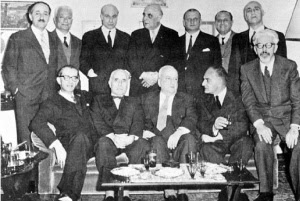 “The Thirties Generation” in 1963
For those who are not familiar with Modern Greek Literature, I should also add a few remarks about the so-called literary “Generation of the Thirties.” As commonly employed, this term describes a group (all male) of novelists, poets, and artists, who came of age in the 1930s. These men continued to be very productive and influential in the following three decades, to the point that a myth with regenerative power was built around them, one that still aspires and inspires (Leontis 2013). Nobel-prize laureate poets Yiorgos Seferis and Odysseus Elytis, novelists Angelos Terzakis, Stratis Myrivilis, Elias Venezis and Yiorgos Theotokas, are some of the most accomplished and distinguished “members” of the “Generation of the Thirties.” The personal papers of most of them have been deposited in the Gennadius Library of the American School. 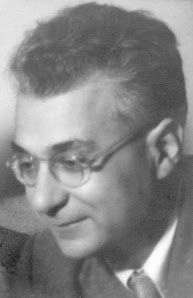 Elias Venezis
In 2009, at an event devoted to Yiorgos Theotokas and the republication of his Essay on America, I was introduced to Greek travel literature about America. Theotokas was among the first writers of the so-called “Generation of the Thirties” who visited America a few years after the end of World War II. While taking receipt of Elias Venezis’s personal papers in 2010, I came upon the manuscript of Land of America and then, in discussions with the author’s daughter, Anna Venezi Kosmetatou, I was made aware of the fact that Venezis was actually the first of the famous “Generation of the Thirties” to travel to the U.S., in 1949.
Except for Theotokas’ Essay on America (Δοκίμιο για την Αμερική), which had the good fortune to be re-published a few years ago, travel writing of this type is difficult or impossible to find on the shelves of Athenian bookstores. When I looked for Land of America at a well-known bookstore in downtown Athens, clerks told me that it was the first time they had heard that Venezis had written a book of this sort. Perhaps this is because, in the age of globalization, trips to America have lost some of the magic and myth that used to surround them. Already in the 1970s, as Vassilis Lambropoulos writes, “with the spread of cinema and even more the advent of television in Greece, travel writing is losing its primary function and sparkle. The public does not need the guidance of an eyewitness to get to know foreign countries.”
For more, http://nataliavogeikoff.com/

Posted by Yiorgos Anagnostou – Γιώργος Αναγνώστου at 11:28 AM 0 comments