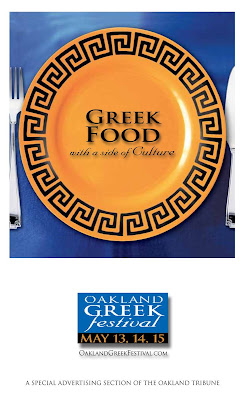 In a recent posting on Greek American festivals, Kostis Kourelis (kourelis.blogspot.com/2011/05/greek-william-penn.html) brings to our attention the significance of advertisement posters as yet another site where Greek American identity is visualized for external consumption. These flyers indeed constitute a "fabulous record of immigrant history," whose collection and study makes for an attractive research prospect. In this spirit I post the design above that speaks to the importance of material culture in representing identity.
• I thank Martha Klironomos for the Oakland festival flyer
Posted by Yiorgos Anagnostou – Γιώργος Αναγνώστου at 1:19 PM 2 comments

The Argentines, the Portuguese and the Greeks (1923) 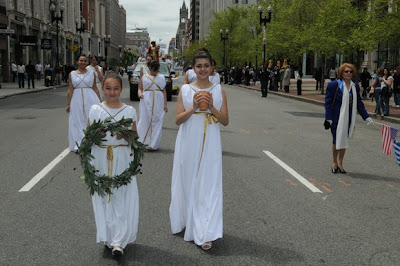 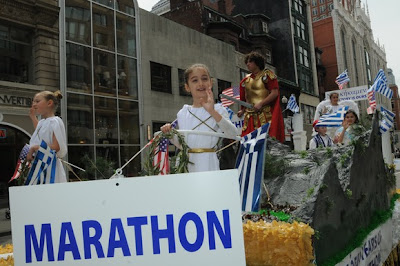 It is worth noting, however, that in popular and official usage the importance of classical Greece is often crystallized in general terms: classical Greece as the foundation of democracy; as the epitome of artistic achievement; as cultural property; as ethnic and world heritage. Less attention is directed to the question of how this heritage could concretely inspire the lives of individuals.

In my teaching about Greek America I explain why classical Greece operates as the bedrock of ethnic identity. But I make it one of my primary aims to discuss precisely how this heritage could speak to contemporary concerns. Greek tragedy and literature commonly inspire world and national literature, and modern authors draw from classical material to reinterpret issues of justice, authority, and values. It is apt, therefore, to ask how contemporary interpretations of Sappho or Euripides, for instance, help position us, say, on the issue of interethnic relations. How could they shape our values?

In this inquiry I turn to Greek-American literature. I examine how novels and short stories discuss the classical past and how these literary pieces could address contemporary concerns. I ask the question, how can fiction carry a real effect in life? A short story, Harry Mark Petrakis' "Pericles on 31st Street," serves my aims well.

Ethnic and class conflict drive the plot of the story, a social drama unfolding in a bar where the clientele, all ethnically marked, gathers to unwind over drinks. It is only the narrator, the bartender, who reveals no information about his ethnic background, claiming in this manner an objective standpoint. The divide is between a multiethnic mix of small shopkeepers who congregate together, and a lone peanut vendor, Nick Simonakis. Ethnic slurs and class insults dart between the two, poisoning the atmosphere. Simonakis' ethnocentrism, his belief, that is, in the superiority of classical Greece, greatly contributes to this conflict. "'Would you mind, old man,' Ryan said as he sat down, 'leaving a little bit of credit to the Irish'? 'I give them credit,' Simonakis said, 'for inventing the wheelbarrow, and giving the world men to push it.'"

But there is more to Simonakis' connection with the classical past. Significantly, he acts upon his identification with the figure of Pericles whom he interprets as the paragon of justice. For this Greek immigrant, Pericles epitomizes a vested orator who speaks the truth to defend public interest. He stands for a noble statesman committed to defeat the demagogues, orators who manipulate the public in order to enhance their own power at the expense of the interests of the polis.

It is this principle, defending the public good, that informs Simonakis’ stance as the plot unfolds. When the shopkeepers’ landlord unfairly raises the rent under false pretenses, Simonakis harnesses all his oratorical power to expose the landlord as a demagogue the way, he imagines, Pericles would have acted. Simonakis' unsolicited intervention serves as a catalyst to successfully mobilize the shop owners against this injustice, earning the admiration of his former adversaries. The story concludes with all the characters toasting their victory in the spirit of a newly found solidarity.

Petrakis' story takes up the relevance of the classical heritage today to provide a contingent answer. Heritage is not an inherently valuable resource, he seems to be telling us. Instead, the crucial question is how we utilize this heritage, what kinds of uses we imagine for it. Deployed in an ethnocentric way, he indicates, the connection with the past fuels ethnic conflict; in this case classical heritage works as a liability. But mobilized as knowledge to effect justice it serves the interests of vulnerable groups; here heritage works as an asset.

Let us note that Simonakis’ position is political in the sense that it does not hinge upon personal likes or dislikes. Neither is it mobilized because of shared ethnic ties. The motivating force to help others (the public interest) springs from his deep-seated principle of opposing those who use their power to exploit. This scorned immigrant acts upon values derived from the classical heritage, as he interprets it, to correct a wrongdoing. He adopts an ethico-political stance, underlining the power of the classical heritage as a usable resource to combat injustice in the present.

This use of literature in my classroom propels me to underline the importance of literature as a vital resource in the education of Greek Americans. I have in mind two places, beyond U.S. modern Greek studies, where literature's power to shape values and identities is indispensable: Greek language schools and leadership seminars.

In regards to the former, the translation of selective Greek-American texts into Greek has the potential to enrich the curriculum of early education. Discussing situations in America, the students' immediate environment, this material appears ideal for cultivating an ethos of cultural citizenship committed to justice, respect for difference, historical knowledge, and appreciation of Greek arts. In regards to the latter, the incorporation of literary texts in leadership seminars, now sponsored by the Next Generation Initiative, expands the scope of leadership beyond organizational, managerial, and personality skills. It is meant to shape leaders capable of appreciating the social and political uses of Greek learning, committed to advancing social justice, knowledgeable and sensitive to social issues, and conscious of the possibilities for and benefits of inter-ethnic solidarities. The initiative I propose will bring together educators, translators, academics, and cultural activists and will require to move beyond clichés and narrow conceptions of identity to advance the relevance of Greek learning in an increasingly complex world.

Cultivating an appreciation of the social and political aspects of literature raises a larger issue. Fellow Greek Americans invariably confront me with a recurrent set of questions: Why do groups x and y, I am asked, support cultural centers, museums, and archives to a greater extent than we do? Why do they produce and consume more literature, more films, more art, more scholarship? Why do they command greater coverage in the national media? These questions reveal a deep-seated anxiety. They underline the awareness that while others enjoy the lion's share of public visibility we are lagging behind, even as we pride ourselves on high educational achievements. This is a vastly complex issue. But if we genuinely aspire for cultural visibility we must invest in the appreciation of letters and the arts, nourishing the skills, knowledge, and imagination through Greek learning among the youth. If we wish to turn into a powerful cultural force contributing substantially to public debates we need highly educated bicultural artists, authors, scholars, educators, journalists, commentators, and critics. Are we committed to creating a public interested in making sense of ourselves and of the world through Greek paideia? This is an urgent question that Greek-American institutions cannot afford to postpone addressing.

• A slightly abbreviated version of this essay was published as "Pericles Should Be Across America, Not Just on 31st St." in The National Herald Online (5/20/11)