"Tis Xenitias O Ponos" (The Exile's Grief)) is about loneliness and the condition of having to live in a foreign land, a common theme in rembetika. The melody is from the famous Turkish song called "her yer karanlik", often recorded in both Turkey and Greece from the 20s up to the present day.

This song was probably recorded in Athens 1935 for release in the U.S. ca. 1938. Vocals: A. Dalgas, Lira: Lambros Leondharidis.

https://www.youtube.com/watch?v=MulOdQFyFLA
Posted by Yiorgos Anagnostou – Γιώργος Αναγνώστου at 1:10 AM 0 comments 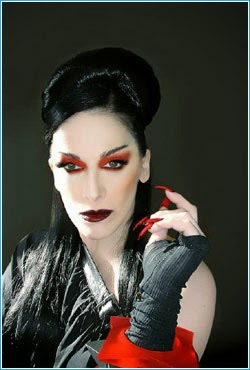 
Hailed as one of the most important singers of our time, Diamanda Galαs has earned international acclaim for her highly original and politically charged performance works, as well as her memorable rendition of jazz and blues. A resident of New York City since 1989, she was born to Anatolian and Greek parents, who always encouraged her gift for piano.
Galαs has contributed her voice and music to Francis Ford Coppola's film, Dracula, Oliver Stones' Natural Born Killers, Spanish/Nicaraguan filmmaker Mercedes Moncada Rodriguez's El Immortal (The Immortal), as well as films by Wes Craven, Clive Barker, Derek Jarman, Hideo Nakata, and many others. In 2005, Galas was awarded Italy's first Demetrio Stratos International Career Award. Her much-anticipated CD, Guilty Guilty Guilty, a compilation of tragic and homicidal love songs, was released by Caroline in the U.S. and MUTE UK worldwide on April 1, 2008; You're My Thrill, will be released in 2009.


A pioneer and one of the most sophisticated anthropologists of Greek America. A heart-felt thank you!

The roundtable discussion of Contours of White Ethnicity is now available for free, thanks to the generosity of the Italian American Review!

“Greeks Gone West” is a series of video vignettes the US Embassy in Athens made about the world of work in the US. Through the prism of Greeks and Greek-Americans with interesting work lives, we hope to improve the understanding of US society and to show possibilities during a time, in Greece, when life seems full of limitations and frustrations.

Each video is roughly three minutes long and addresses how each of the 23 participants came to do what they do, whether a music supervisor, a film director, an HIV doctor, a restaurateur, an advertising guru, fashion designer and several other people, and what they plan to do next. We hear about their experiences and relations with Greece, but mainly we hear how they've pushed through the toughest parts of their journey. We plan to profile a pathologist, a music producer, a fashion designer, a chef, a video game designer, and several other people.