A Greek American Homicide Detective – "The Greeks of Beaubien Street" 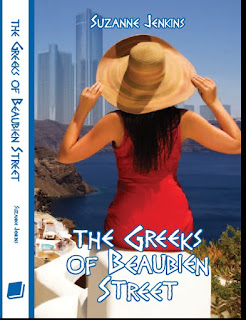 "Saugatuck Township resident Suzanne Jenkins has just released the first book in her series called The Greeks of Beaubien Street. The book is part murder mystery, part drama. The main character, Jill Zannos, is a homicide detective whose family owns a grocery store in Greektown in Detroit. Jenkins says Jill is always walking a fine line between her rough, modern job and her old-fashioned family. But Jill soon finds out that her family has a few secrets that makes her realize they are not as perfect as they seem.

Jenkins grew up in Greektown and she says a lot of what made her Greek, in her mind, was the food. She says her family didn't speak Greek or go to an orthodox church, but they always made Greek food in their home. In the book, Jenkins mentions many places that Detroit natives and Saugatuck resident might recognize, like Christo's Roadhouse in Douglas, Michigan.

Jenkins other interest in policework helped fuse together this mix of family drama and a CSI-like mystery. Jenkins also used her knowledge as a former nurse to fill in the medical details.

She puts a lot of attention into human relationships, especially the how family members and spouses interact with eachother. Jenkins says she put a lot of her experiences over the years in the book."

(Thanks to DG for bringing this to my attention)

Posted by Yiorgos Anagnostou – Γιώργος Αναγνώστου at 10:10 AM 0 comments

Greek Americans as a Target Consumer Group – A Commercial

Posted by Yiorgos Anagnostou – Γιώργος Αναγνώστου at 1:22 AM 0 comments

Exploring Variations on a Theme “A Poetic Reading Salon”

In his book, The Writer as Migrant, Ha Jin, asks for whom do bilingual writers write and why. He refers to writers with an immigrant background and particularly those in exile who reflect on the political oppression in their country of origin. He explores identity issues and whether bilingual writers: -

 Write for themselves or a collective endeavouring to act as spokespersons for their ethnic group.

 Are liberated or entrapped in their ethnic identity.  Curate or create culture.

The Diasporic Literature Spot seeks to generate discussion on the latter questions particularly whether bilingual writers are creating a new culture moving beyond stereotypic images of their immigrant experience.

Poets, interested in participating in the Reading Salon, are invited to submit two to four poems noting why they consider their work to be creating rather curating culture.

Expressions of interest should be emailed to reading.salon@diasporic.org by January 18, 2013.

Organised by Vicky Tsaconas and Loula S. Rodopoulos the event hopes to attract poets interested in reading their work and discussing the issues raised by Ha Jin.


From the Archive: The following piece was originally posted January 6, 2005 at http://classics.osu.edu/modern-greek-faculty-postings

The scope and significance of academic Greek-American Studies are unfortunately very little known to the wider public. Audiences learn about this academic field piecemeal, through scattered remarks that often misrepresent it. Moreover, as a result of misinformation and negative publicity, lay educated audiences and community leaders may develop negative attitudes toward it. This is doubly unfortunate because the field currently enjoys a great revival in both the academy and key sectors of public life. It has therefore become urgent to publicize the accomplishments of academics who think and write about Greek America; it is necessary to communicate the fruits of their labor to interested audiences in order to forestall mutual misunderstanding.

Admittedly, the practitioners of academic Greek-American Studies are not as numerous as one would like. There is no doubt that the visibility of Greek-American Studies in the American academy is not what it ought to be. There should likewise be no hesitation in admitting that a great deal of Greek-American history and culture remain unexamined by scholars. If one wishes to critique academic Greek-American Studies for these imperfections, this should require a serious discussion of the complex academic and non-academic forces that have relegated our field to the margins of the academy. But these conditions make it all the more imperative to recount the contributions of the academics who toil to produce and disseminate knowledge about Greek America, and to support their effort to gain greater visibility for their field within and without the Academy.

For it is now an indisputable fact that academic Greek-American Studies have become a key contributor to the intellectual and cultural vitality of Greek America. The field has recently injected a necessary theoretical sophistication, committed professionalism, ethos of public outreach, and ethical vision of pluralism into diverse domains of the public sphere such as academic teaching and publishing, ethnic and national media, festivals, libraries, archives, and the reading public. These contributions, coupled with a critical respect for the legacy of earlier contributors, define the current orientation of Greek-American Studies.

The evidence that supports these assertions is available for everyone to see. Here is a select list of the field's accomplishments:
Since the 1970s, Modern Greek Studies Programs in the American academy have been particularly successful at incorporating courses on the history, culture and literature of Greek America into university curricula. Thousands of students from diverse ethnic backgrounds have taken these courses and thousands more will do so in the future. Interestingly, on the basis of my own teaching experience at The Ohio State University, it is in these classes that second and third generation Greek-American students first develop an interest in their ethnic history and culture as well in their family background.

Academics have recognized the value of non-academic writers on Greek America. Rather than allegedly rebuffing the research, publications and cultural activism of non-academics, they have been consistently promoting it. The examples are numerous: Labor historian Dan Georgakas, for one, has reviewed Helen Papanikolas's latest book in the Journal of Modern Greek Studies. In the same journal, anthropologist David Sutton has reviewed the anthropological work of Michael Kalafatas, who is a non-professional anthropologist. In this list I must include my own essay on Helen Papanikolas which was published in a recent book by the Utah State University Press, an academic publisher.

In a similar vein, Modern Greek Studies Programs in the American academy have recently started following the lead of non-academic, grass-roots preservation projects; they too have begun to document oral histories about the Greek-American immigrant past. Specific academic projects of this kind include:

• "The Greek-American Communities Library Collection Project" at my own home university, The Ohio State University (publicized in The GreekAmerican, December 2-3, 2000). And

• The new initiative by Modern Greek Studies scholars at the University of Michigan to collect interviews from Greek-American intellectuals, artists, and writers.

Academics continue to bring important Greek-American authors to the attention of international audiences. The work of Zeese Papanikolas has been made available to Greek speaking audiences in translation, and the writings of Demetra Vaca-Brown have been re-introduced to the English speaking world through the publishing activism of ProfessorYiorgos Kalogeras (Aristotle University of Thessaloniki).

In addition to their teaching responsibilities, scholars of Greek America invest enormous intellectual energy on research and writing; in doing so they have succeeded in publishing their work in internationally prestigious presses and journals. Through this demanding, labor intensive, and time-consuming task, they seek to make Greek America an integral component of intellectual discussions about immigration, ethnicity and heritage preservation.

Increasingly, it is becoming the rule that these scholars take an extra step: They supplement the arduous task of teaching and academic publishing with writings and other activities for the public benefit. The evidence for this is again overwhelming. Professor Martha Klironomos (San Francisco State University), who directs "The Greek American Oral History Archive" project, has created a lecture series where Modern Greek Studies scholars and artists are routinely invited to present their research to local communities. Historian Ioanna Laliotou (University of Thessaly, Greece), author of a recent book on Greek migration (The University of Chicago Press), incorporates her research findings about immigrant Greek America in her regular writings for the Greek press. In addition to her academic work on Greek America, scholar Artemis Leontis (University of Michigan) has devoted time oncurating an exhibit on Greek immigrant women's culture, and on disseminating her research in popularly accessible venues. From my part, I have also devoted time and effort in educating the public about Greek-American history and culture. […]

A clear picture emerges out of this selective list of accomplishments. Academics working in Greek-American Studies make a Herculean effort to promote the field both in the academy and in public life. In other words, they are busy building bridges between their field of study, the academy, and educated lay audiences.

What is noteworthy about this commitment is that it avoids claims of ethnic superiority and cultural celebrationism. Academic Greek-American Studies are guided by an ethical vision of social justice and pluralism. In this capacity scholars critique practices which result in the marginalization of women, the exploitation of workers, the abuse of powerless, the exclusion of alternative points of view on Greek identity, and the discrimination of those whose views or physique do not conform to dominant ideals. This critical position does not mean that Greek-American Studies engage in self-destructive criticism; the field is politically suave and scholarly sophisticated in identifying Greek America's cultural creativity, value, and positive impact on social life in the United States and elsewhere. In other words, it is reflexive enough to maintain a fair balance between cultural critique and a constructive display of Greek-American contributions.

As my essay makes clear, we are currently witnessing a bustling intellectual and cultural fermentation in the academic field of Greek-American Studies. This is a time when the research output of the field is quantitatively intensified and qualitatively refined. Our research contributes to a nuanced understanding of Greek America; the fact that it is increasingly recognized by internationally respected institutions speaks volumes about its quality. It is necessary therefore to publicize these new developments. At this time of increasing visibility, Greek-American Studies could harness the support of those who genuinely care about the cultural and intellectual vitality of Greek America. Those who are interested in understanding various facets of this heterogeneous social reality we call Greek America are all invited on board to contribute their talents and resources.

What do we know about Greek American Children's Literature?


Posted by Yiorgos Anagnostou – Γιώργος Αναγνώστου at 11:53 AM 2 comments