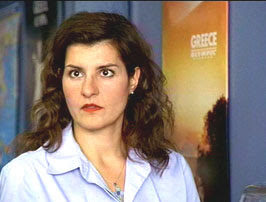 In lieu of an abstract, here is a brief excerpt of the content:

As the nation has held itself up to the media mirror . . . the image of white America that reflects back looks less and less like the whitebread, Protestant world of Rob and Laura Petrie [from The Dick Van Dyke Show (1961–1966)], and rather more like, well, a big fat Greek wedding.

The theory of semiotic excess proposes that once the ideological hegemonic work has been performed, there is still excess meaning that escapes the control of the dominant and is thus available for the culturally subordinate to use for their own cultural-political interests.

Popular American film often oversimplifies the experiences of American ethnics of European heritage. Although Polish Americans, German Americans, or Greek Americans may appear as ethnic characters, their claim to difference is rarely the primary focus. Mainstream cinema deploys various European American identities as tropes to address issues of national belonging, to assert dominant ideals, to allegorize the American Dream, or to discipline ethnicity. It largely refrains from delving into the intricacies of their hyphenated lives. European Americans, Dan Georgakas notes, “have served as cinematic wallpaper, good for an odd costume, colorful dialog, and quaint habits” (36). In this respect, Hollywood reproduces larger social discourses. The narrative of America as a nation of immigrants elevates the acculturated European American as a national icon, endowing this figure with cultural hyper-visibility as it simultaneously contains it through a scripted narrative: hard-working, colorful in its folk dances, authentic in its cuisine, law abiding, family-and community-centered, civic-oriented; a cookie-cutter ethnicity.1 This combination of heightened public visibility and ideological containmentconfronts cultural critics with the question of how to proceed with the analysis of European American ethnicities now that they have become an American norm: assimilated yet with cultural affiliations beyond the dominant. What are the critical routes that enable the recovery of these historically distinct yet interrelated identities as a richly textured field? How do we frame their representations in order to advance research that recognizes the multiple facets of these ethnicities while confronting their control by the dominant society?

One venue for inquiry presents itself via an unlikely source. The block-buster My Big Fat Greek Wedding (2002), a film that might be overlooked as a banal illustration of the conventions of romantic comedy, suggests a fresh way to address the issue—from the perspective of popular culture. The film may dismay with its reductive representation of self and other. Its portrayal of immigrants as primitives in our midst reanimates a stock of images common to Hollywood and ethnographic cinema in general: the infantilization, debasement, and exoticization of the other, cast as an aboriginal who embodies a way of life that is bygone in the spectator’s culture. In this narration, the immigrant is seen as parochial and frozen in time, belonging to an earlier temporal reality. What is more, the objectified gaze of the camera does not spare practices coded as WASP, but subjects them to merciless mocking. Nevertheless, the film produces varied ways of seeing ethnicity; taking heed of them may move us beyond readily recognized meanings and open up space for alternative interpretations of ethnicity.

This paper explores this maze of filmic representations to show how ethnicity is deployed in specific contexts. The emphasis is on the construction of ethnicity in relation to dominant categories such as romantic love, femininity, whiteness, modern anomie, immigrants, and autonomy. For this purpose, the discussion is organized around two major axes. First, it identifies the dominant meanings in the filmic narrative, including the portrayal of the culturally dominant/self and subordinate/immigrant other. Specifically, it identifies the following perspectives through which audiences are invited to make sense of the film as a romantic comedy that exploits ethnicity to reproduce hegemonic ideologies about love and marriage:
…
The second axis of this paper recognizes alternative meanings in the text, the “excess meaning” that could serve ethnicity. For this purpose it is crucial to recognize the following internal contradictions in the film. First, the film brands WASP practices as culturally insensitive, but also construes WASP subjects as willing to accept, at least partially, the cultural logic of ethnicity. Second, it portrays immigrants as primitives in our midst but also recuperates immigrants as agents of meaningful change. My reading further notes the contexts in which the power relations between the culturally dominant and ethnicity are reversed, a reversal that explicitly places the former in a minority position. Herein lies my interpretive interest. Such decentering advances cultural autonomy for ethnicity while at the same time promoting a fresh way of looking into the relationship between the hegemonic and the ethnic based on intersubjectivity. This mode of seeing moves beyond the reductive gaze in the film, activating mutual understanding based on interethnic looking as a process and as a relation acknowledging the subjectivity of the other (Kaplan xviii).
…
http://muse.jhu.edu/login?auth=0&type=summary&url=/journals/melus/v037/37.4.anagnostou.html

Proliferation of Identity Narratives Beyond Ethnicity

This Institute will consider the substance of the terms “diaspora,” “transnational,” “accommodation,” and “memory” through the specific prism of the four distinct waves—First (1917-40), Second (1947-55), Third (1967-89), and Fourth (1989 to the present)— of Russian-speaking immigrants to America.
One of the core issues addressed is whether we can create a sophisticated narrative synthesis of the “Russophone Experience” in America that could beintegrated into broader courses on American politics and immigration, sociology, anthropology, and ethnic studies. More than this, can this synthesis be applied to the experience of other immigrant groups?
Institute applicants—current faculty members at U.S. institutions, independent scholars, museum curators, and up to three advanced graduate students—will compete for the twenty-five available Summer Scholar spots.
Over a three-week period, this select group will engage in a lively dialogue with an extraordinary array of upwards of fifty master teachers, scholars, and social services and community representatives of the last three waves of emigration (and with the children of the first). A full description, daily schedule, and application information will be found at: NEHSummerinst.Columbia.edu

Posted by Yiorgos Anagnostou – Γιώργος Αναγνώστου at 12:52 AM 0 comments

Posted by Yiorgos Anagnostou – Γιώργος Αναγνώστου at 12:35 AM 1 comments