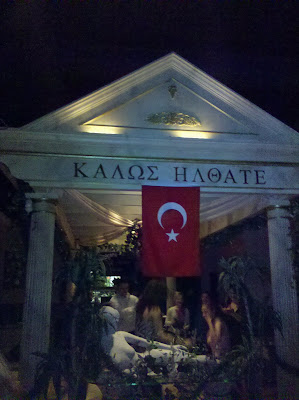 Serendipity adds exciting layers to the practice of teaching. At the end of a class session this week on the early twentieth-century café aman scene in the United States–clubs attracting multiethnic audiences from the Balkans, Asia Minor and the Middle East–a student waited to share with me the snapshot featured above.

This is how the student, who is connected with both Greek and Lebanese cultures, described the event: “This was at a dance hosted by the Lebanese Student Organization and the Turkish Student Association of OSU. It was held at a Greek restaurant in Dublin, Ohio, called the Greek Corner (which I came to find is actually owned and operated by Albanians). Because it was a Greek restaurant, the food and décor of the establishment was Greek (hence the Greek writing), but the Turkish and Lebanese students each displayed decorations (i.e. flags) from their respective countries. The music was a mixture of Arabic and Turkish songs.”

These contemporary mixings! Ethnic signs are appropriated for their economic and cultural capital while bearing no necessary connection with the identities of those who reproduce them. Eclectic coexistence of national codes–a welcome sign in Greek, Turkish and Lebanese flags, the replica of a Greek statue and others simulations of Greek identity, Arabic and other dancing–explode cultural purity. Emergent multiethnic situations, historically suppressed by nationalism, appear in various combinations. Contact zones where multiethnic audiences actualize around shared tastes on music and dance take place in New York City, San Francisco, Melbourne, and elsewhere too.

The dissonance between the Greek identity of restaurants and the ethnic identities of those who operate them is now a common occurrence, as I can attest from the Columbus restaurant scene. As an entrenched cultural and economic phenomenon in the U.S., Greek restaurants are now claimed by an assortment of ethnic entrepreneurs whose identities and cuisines lack the cultural caché of the Greeks.

This raises a number of fascinating questions. How Greek identity is constructed in these settings? What is the role of material culture and cultural practices in simulating ethnicity? Where do objects of decoration and recipes come from? How are they refracted in their translation? Where does the food originate, how is it prepared, how is it served, and who serves it?
Posted by Yiorgos Anagnostou – Γιώργος Αναγνώστου at 9:17 PM