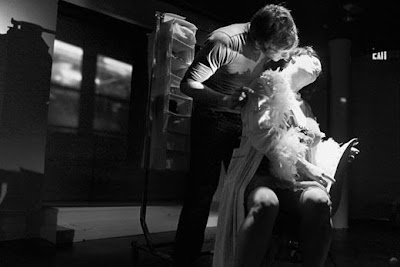 The organizers of the upcoming 4th Symposium of the European Association of Modern Greek Studies (Ευρωπαϊκή Εταιρεία Νεοελληνικών Σπουδών) performed a great public service in publishing the presentation abstracts. This is useful not only to academics but also the wider public which has now access to the newest modern Greek scholarship by (mostly) European-based scholars.

The 358 page document listing the program and the abstracts is available online at:

On page 175 of the above document there is a paper of particular relevance to Greek American studies, addressing Greek American theater during the first half of the twentieth century.

So it happened that the announcement of the Symposium reached me at a time when I was reading a work with several references on the same topic.

In his Ph.D. dissertation, Kostis Karpozilos also discusses Greek theater in the U.S.

during the interwar years, but he recognizes its political function among working

class Greek Americans. As he shows, theater was an integral component

of Greek political culture in urban areas, sustaining the struggles of the working

class during the New Deal and the era of the "popular front."

Posted by Yiorgos Anagnostou – Γιώργος Αναγνώστου at 11:54 AM