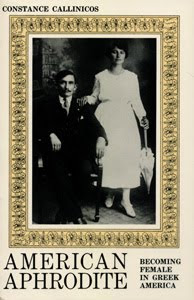 American Aphrodite: Becoming Female in Greek America turns private dramas into public documents. It documents the experiences of those Greek American women who were oppressed by ethnic patriarchy. It tells the stories of those who have felt the iron grip of male domination and its power to put down women; to mute, insult and render them inferior and unworthy. Its author records the far-reaching consequences of psychological and physical abuses against women. Viscerally felt, patriarchy shattered dreams, crushed desires, crumbled lives, dwarfed ambitions, stripped away self-confidence, fermented rebellion; it traumatized and oppressed. Family relations were injured, and immigrant culture was spited. Patriarchy exiled women doubly, both from family and ethnicity.

The book builds on an oral history project, which consists of the author’s interviews with a total of 111 women spanning three generations. It gives voice to the “picture bride” generation of the 1920s and 1930s and to the daughters and granddaughters of that cohort. The sample does not include post-World-War II immigrant women, as the author makes clear. For her research, Callinicos scoured the country between 1978 and 1982, looking to interview women who grew up in various places in the United States but who shared the social background of early 20th century rural Greece. Separated by geography but connected through an “almost identical upbringing,” these three generations of women “were acculturated,” Callinicos distressingly points out, “as Greek peasant girls, first, last and always.” It was the transplanted Greek village in America, the “horio,” which overwhelmingly defined their existence.

There is a personal component in the book as well, with the author disclosing parts of her own story as well as her family’s history. Briefly yet poignantly, she draws the portrait of her immigrant grandmother. Familiar only with bits and pieces of the family’s distant past, Callinicos puts together the fragments to reconstruct her grandmother’s world, a peasant way of life wholly transplanted in 1920s America. Readers are told a story of uninterrupted continuity, where the ways of the Greek village survived intact to entirely define the life of an immigrant woman in America. “In fact,” the author writes, “my grandmother did live out her life in the village, even though her body was here in America.”

Callinicos, a professed feminist, also undertakes a dejected appraisal of her mother’s life. American-born, vibrant, and “gifted with a talent for music and a beautiful voice,” Mary Zervas Triantafillou aspired to “become a musician and teacher,” an ambition that was thwarted by traditionalist parents. Despite her struggle to escape from parental control, Mary ultimately succumbed to an arranged marriage, ending up as an unpaid waitress and cashier in her husband’s restaurant, and a dutiful “Good Greek Mother and Homemaker.”

This is a book driven by deeply felt emotions. Anger layers it. Passionate resolve motivates its writing. Frustration textures it. Tears stain its pages. And the conviction that it matters, at all cost, to tell its story animates its purpose. The author’s decision to include lengthy interview material affords a direct glimpse into this nexus of these feelings. Intimately confessional, the numerous testimonies converge on a single point: they sorrowfully document and bitterly indict Greek patriarchy for limiting the lives of women. A chorus of women’s voices expresses an avalanche of grievances. Women were denied opportunities for education; shamed for their non-conformity; silenced as inferior; humiliated, again and again, because they happened to be women, an identity which patriarchy devalues.

The author joins the chorus, recalling episodes of her own experience growing up in Greek America. She brings attention to ordinary sociability where the ideology of patriarchy infuses the worlds (and words) of men and is internalized by women. Toasting newlyweds for a son (not a daughter); rehashing proverbs about women as sexually vulnerable and dangerous; treating sons preferentially. It is in this kind of everyday incidents that patriarchy works most effectively to dominate women. It makes it appear natural that women represent a burden. It is as if it goes without saying that women are lesser than men. In the context of the honor-shame culture, where non-conformity to traditional ideals brings shame to the entire family and compromises its honor, patriarchy requires that women must be supervised and controlled.

The accretion of ordinary insults against women ultimately weaves a suffocating social reality. The author informs readers that women’s asphyxiation constituted a grim reality even in the late 1980s and 1990s. Ominously, she reports: “The Greek world in America remains largely androcentric. Many (women) feel it is a world they are not inclined to continue to inhabit or perpetuate. Simply put, they leave.”

Callinicos offers acute insights on how patriarchy is transmitted. She understands that this ideology can be found where least suspected, in the pleasurable experience of folk dancing for instance. Consider the reasons why she recalls an early dance lesson from her immigrant grandmother. Her purpose is to show that this instruction is more than learning how to dance; it is learning, in fact, how to become a traditional Greek woman. The young Callinicos is instructed to dance, “delicately and modestly. Never (to) kick the feet up off the ground.” The authoritative admonition continues, drawing a connection between dance and gender: “Too much like a man that way,” the grandmother cautions. “This is a woman’s dance. A little lift of the skirt, a modest woman’s way. Never too much.”

Callinicos ponders the meaning of this warning, contemplating how the immigrant past shaped the identities of Greek Americans. Reflection leads her to recognize that traditions are far from innocuous; they may perpetuate women’s domination. Traditional expectations of folk dancing, for example, encourage male dancers to display daring, assertive bravado, and bold aggressiveness; in contrast, it demands that their female counterparts adhere to modesty, self-restraint, and discipline, norms that define appropriate behavior throughout a woman’s public life. Expressive traditions contribute to women’s subjugation.

Significantly, while the author indicts immigrant culture, she is not willing to altogether abandon it. Ethnic food and dancing still function as sources of pleasure, meaningful sociability, and cherished intergenerational remembering. At the same time, it is not possible for women to authentically connect with ethnicity, Callinicos suggests, unless they form their own exclusive, all-female circles, away from the authoritative male gaze. Here, the author borrows a page from a specific brand of feminism, influential in the 1970s and the 1980s. It was common for women to establish their own separate places to socialize, create, and work, shutting off the males whose demands, controlling attitudes, censoring comments, and sexism were seen as inhibiting women’s liberation.

It is from this feminist angle that Callinicos advocates resistance to patriarchy. Adopting the perspective of an activist, she urges women to battle those ideas and behaviors that subjugate them. As a template for future action, she offers a personal story, which unfolds in the exclusive company of women who gathered to celebrate the birthday of her sister. This festive occasion is turned into an act of rebellion when women violate the patriarchal restrictions imposed upon them through folk dancing. The narration of this event overflows with the cathartic exuberance one experiences in the act of subverting structures of domination. With “the hypnotic melodies of the clarinet” and the “incessant beating of the drum” (288) as the sensory background, the leader of the folk circle dance appropriates male behavior and creates an emerging imagery that changes a tradition that has restrained women. The woman dancer leaping with “her billowing skirts swirling at her ankles” (288), kicking up her legs, and shouting, redefines tradition in women’s terms.

Documenting and critiquing patriarchy exemplifies a particular feminist strategy, namely consciousness-raising. Revealing the workings of patriarchy explains the real causes of women’s domination. In this manner, women who were taught to blame themselves as intrinsically unworthy are now in a position to understand what brought about their condition (and conditioning). Exposing the causes of their domination empowers women. It provides a language through which they can speak back and resist patriarchy in all its guises.

A subversive component in American Aphrodite is bound to generate controversy, as it bulldozes away a cultural taboo in Greek America, the absolute prohibition against airing one’s dirty linen. Violating this code of silence assaults the principles of the honor-shame culture: Transgressions from cultural ideals must be kept hidden, away from the prying public. Predictably, interviewees made a point to keep their anonymity, to avoid exposing their family. It is the making of the author’s story public that defies the principles of honor. It is also the decision to publish narratives about duplicity in Greek America that risks ethnic stigmatization. Ethnic groups are conscious of their historical vulnerability, exercising caution to keep “dark secrets” away from public view. The airing of such secrets raises a politically and ethically sensitive issue, namely how an author introduces and discusses ethnic self-critique.

Throughout the book women’s narratives of victimization powerfully cascade, leaving no doubt about the reality of patriarchy in Greek America, past and present. Yet the persuasive case laced by the testimonies should not distract the readers’ attention from a serious fault of the book. Callinicos suggests that the sample of interviewed women represents the whole. It is precisely this erroneous assumption that enables her to portray Greek American families of early 20th century rural origins as a homogeneous entity across time and space. Incredibly, Greek Americans are depicted as frozen in time, wrapped up in their past, mechanically reproducing peasant patriarchy. At least some immigrant families displayed remarkable cultural versatility and openness to new ideas where caring, non-patriarchal males encouraged their daughters' creative proclivities. In the piece “The Twined Muses: Ethel and Jenne Magafan,” for example, Steve Frangos takes note of an immigrant father from a small village near Mesinia who “recognized and warmly supported” his daughters’ “artistic gifts.” This portrait alerts us about the existence of a male Greek America far more diverse than the one reconstructed in the book. As it is evident in my discussion, “American Aphrodite” greatly contributes to the struggle of women’s liberation. But in neglecting to take into account the heterogeneity of peasant families the book commits a disservice to Greek America and to the wider reading public, which it explicitly identifies with the “Americans who want to know her (the Greek American woman).”

In this regard, reading American Aphrodite presents a twofold challenge. On the one hand, it calls upon the reader to enter a world that devastated women, and to reflect on how to actively battle patriarchy. On the other hand, a critical reading should resist accepting that world as the only ethnic reality.

Posted by Yiorgos Anagnostou – Γιώργος Αναγνώστου at 8:31 AM