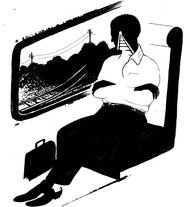 Over the last four years, excluding summers, I have conducted a casual sociological experiment in which I am both participant and observer. It’s a survey I began not because I had some specific point to prove by gathering data to support it, but because I couldn’t avoid becoming aware of an obvious, disquieting truth.

Almost invariably, after I have hustled aboard early and occupied one half of a vacant double seat in the usually crowded quiet car, the empty place next to me will remain empty for the entire trip.

I’m a man of color, one of the few on the train and often the only one in the quiet car, and I’ve concluded that color explains a lot about my experience. Unless the car is nearly full, color will determine, even if it doesn’t exactly clarify, why 9 times out of 10 people will shun a free seat if it means sitting beside me.

Giving them and myself the benefit of the doubt, I can rule out excessive body odor or bad breath; a hateful, intimidating scowl; hip-hop clothing; or a hideous deformity as possible objections to my person. Considering also the cost of an Acela ticket, the fact that I display no visible indications of religious preference and, finally, the numerous external signs of middle-class membership I share with the majority of the passengers, color appears to be a sufficient reason for the behavior I have recorded.

Of course, I’m not registering a complaint about the privilege, conferred upon me by color, to enjoy the luxury of an extra seat to myself. I relish the opportunity to spread out, savor the privacy and quiet and work or gaze at the scenic New England woods and coast. It’s a particularly appealing perk if I compare the train to air travel or any other mode of transportation, besides walking or bicycling, for negotiating the mercilessly congested Northeast Corridor. Still, in the year 2010, with an African-descended, brown president in the White House and a nation confidently asserting its passage into a postracial era, it strikes me as odd to ride beside a vacant seat, just about every time I embark on a three-hour journey each way, from home to work and back.

I admit I look forward to the moment when other passengers, searching for a good seat, or any seat at all on the busiest days, stop anxiously prowling the quiet-car aisle, the moment when they have all settled elsewhere, including the ones who willfully blinded themselves to the open seat beside me or were unconvinced of its availability when they passed by. I savor that precise moment when the train sighs and begins to glide away from Penn or Providence Station, and I’m able to say to myself, with relative assurance, that the vacant place beside me is free, free at last, or at least free until the next station. I can relax, prop open my briefcase or rest papers, snacks or my arm in the unoccupied seat.

But the very pleasing moment of anticipation casts a shadow, because I can’t accept the bounty of an extra seat without remembering why it’s empty, without wondering if its emptiness isn’t something quite sad. And quite dangerous, also, if left unexamined. Posters in the train, the station, the subway warn: if you see something, say something.