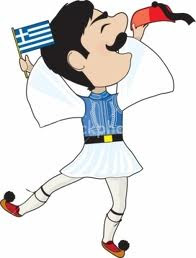 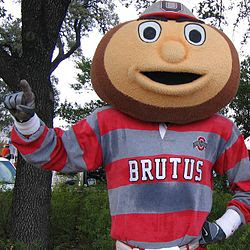 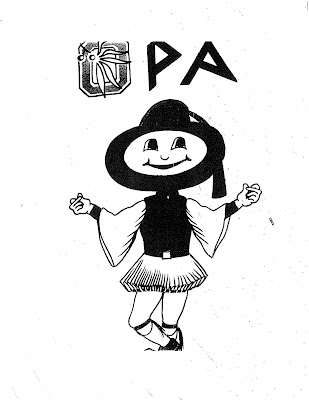 Drawn by an anonymous Greek-American student at Ohio State University (OSU) (circa mid1990s), the figure at the bottom above combines symbols of ethnic and regional identity. The traditional dress as well as the exclamatory OPA clearly point to Greek ethnic identity. The buckeye nut, on the other hand, which figures as the headpiece of the dancing figure, is the symbol of the State of Ohio, and OSU athletics. Note that the OPA is also entangled in the dual symbolism. The decorative buck eye brings attention to the O which itself is drawn in a manner to replicate the letter as it commonly appears in OSU prints.
The popular artist here draws from two ubiquitous images: the ezvone (pervasive as an expression of Greek-American male identity in U.S. Greek festivals, and symbol of Greek national identity); and the Brutus Buckey, the athletics mascot of The Ohio State University. The "Buckeyes" is a term referring to OSU's intercollegiate sport teams and players. The image gives expression to a Greek-Ohio-American identity, in fact a Greek-American Buckeye.
The image is a great example of hybridity, which refers to cultural forms combining elements of more than one culture. As such it invites further commentary. What does a hybrid identity mean? Should we value it or not? Why? Is it a progressive cultural form, or not?
But I resist to offer my own thoughts as I am primarily interested in your own comments. How does the image make you feel? What kind of thoughts does it trigger? Is this image significant, and in what way?
Posted by Yiorgos Anagnostou – Γιώργος Αναγνώστου at 9:25 PM