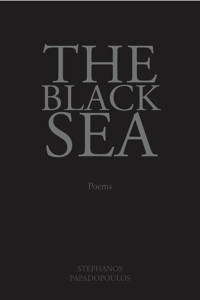 NOVEMBER 14, 2012 ‑- The Black Sea was published by Sheep Meadow Press yesterday. It is the third collection of poems from Greek-American poet and Civitella Ranieri Fellowship awardee Stephanos Papadopoulos. His previous collections include Hôtel-Dieu and Lost Days.

The Black Sea explores the historic "great catastrophe" of the Pontic Greeks of Asia Minor in the 1920s through a series of "sonnet-monologues" or voices from the past. Priests, prostitutes, soldiers, and a bizarre cast of characters move through this poetic reimagining of a tragic chapter in Greece’s history.

"These are simply poems about people and suffering, an homage to a generation of exiles, all victims of the futility of war," says Papadopoulos.

Based on the author's own family history, as well a fictitious retelling of scenes from the population exchange between Greece and Turkey, the poems in this book jump from the tragic to the humorously absurd, and focus on the very human folly of war, suffering and exile. Intrigued by the idea of an "inherited memory of war" and a series of old family photographs, the author set off on a motorcycle trip of the southern Black Sea, exploring the old Greek villages and monasteries of the Pontic Greeks and travelling across the same landscapes still inhabited by the ghosts of Strabo, Xenophon and Alexander the Great.

"Unobtrusively but decisively, Stephanos Papadopoulos' work is informed by various cultures: American, Greek, ancient and modern, French and English. He follows other poets, but mostly he follows his heart. In his poetry the melancholy of the modern finds its beauty in loss itself..." Stanley Moss.

About the Author
Stephanos Papadopoulos was born in North Carolina in 1976 but raised in Paris and Athens. In addition to authoring Hôtel-Dieu, Lost Days and The Black Sea, he worked as editor and co-translator (with Katerina Anghelaki-Rooke) of Derek Walcott’s Selected Poems into Greek. A bilingual selection of his poems was published in Italian by Casa Grande Editions in 2012, translated by Matteo Campagnoli. His poems and translations have appeared in journals such as The New Republic, The Yale Review, Poetry Review, Stand Magazine and numerous international journals and anthologies. He has translated works of Greek poets, K. Anghelaki-Rooke, Yiannis Ritsos and Kostas Karyotakis, among others.
He attended the University of North Carolina at Chapel Hill, and spent a year at the University of Edinburgh, Scotland before graduating with a BA in Classical Archaeology from UNC. In 1998, his work attracted the attention of Derek Walcott, who invited him to attend the first Rat Island Foundation seminar in St. Lucia. After college he traveled widely, living in London, Paris, Greece, Guatemala and New York. He currently divides his time between Greece and the United States.
The Sheep Meadow Press
P.O. Box 1345
Riverdale, NY 10471
poetry@sheepmeadowpress.com
http://www.upne.com/1937679095.html