Epitaphios: A Poem, a Song, a Dirge (Writing for the local community) 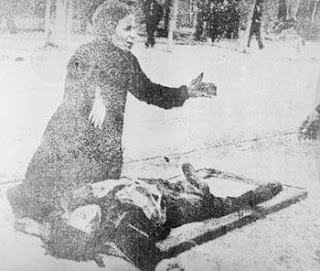 The story of the poem “Epitaphios” starts with a newspaper photograph depicting a mother lamenting over the body of her dead son, killed during a peaceful protest by tobacco workers, in May 1936, in Thessaloniki. The victim was one among a total of twelve dead workers in a strike “drowned in blood by the dictatorial government” at the time.
When poet Yannis Ritsos (1909-1990) saw this dramatic image, moved he rendered it in poetry. Initially entitled “The Dirge” (Miroloi), it was published the same year in a leftist newspaper. It was later expanded to 324 lines and renamed “Epitaphios.”
This is the opening two couplets:
My son, flesh of my flesh, dear heart of my heart, / little bird in the poor courtyard, blossom in my desert, How is it that your eyes are closed and you do not see me cry, / and you do not stir or hear my bitter words?
The final form of the poem consists of twenty stanzas of eight rhymed couplets (with some exceptions). The fifteen-syllable meter and the rhyming are unfortunately sacrificed in its rendering into English. Bilingual readers will readily recognize the loss in the translation:
Στη στράτα εδώ καταμεσίς τ’ άσπρα μαλλιά μου λύνω / και σου σκεπάζω της μορφής το μαραμένο κρίνο.
Here in the middle of the street I let down my white hair / and cover the wilted lily of your form.
The poem has an interesting music life. Musician Mikis Theodorakis (1925-2021) composed eight songs based on selective verses in 1958, and soon later Manos Hadjidakis (1925-1994), another prominent composer, arranged the same music for recital-hall performance.
“Epitaphios” is a lamentation, a public expression of intense grief, which is put into music and sung, something which is not unusual in Greek religious and social life. An ancient tradition, lamentations express heightened grief, not only about the loss of human life but also social and political crises. There are folk lamentation-songs, for example, about the fall of Constantinople. Early in the 20th century, the experience of emigration––xenitia––generated folk songs about a family member venturing into an uncertain, dangerous future. There is also a rich tradition––now vanishing––of dramatic performances of ritual laments in rural Greece, particularly the regions of Mani, Epirus, and Crete. Laments are about shared grief and collective participation in its experience.
Significantly, “Epitaphios” draws from both the religious and folk traditions of lamentations. It draws recurrent motifs and images such as lavish praise for the deceased and incredulity in the case of untimely death. These motifs heighten the emotional involvement of the participants. Greek Orthodox readers will recognize the connection between the title of the poem–– “Epitaphios”––and the ecclesiastical tradition, as it obviously evokes the lament “Epitaphios Thrinos,” the dirge of the Virgin Mary and the mourning women at the tomb of the crucified Christ. The poem draws from several images and themes in Mary’s lamentations. They share, for example, the theme of unjust death. Christ is crucified “as a criminal among criminals” (stasis 1.8), and is “unjustly condemned” (1.56), just as the dead laborer is killed unjustly “for demanding adequate wages for his work”: My son, what wrong did you commit? From unjust men / you sought payment for your own labors. Or, if “with his physical beauty Christ beautifies the natural world” (stasis 1.9), the son’s beauty is lavished by the grief-stricken mother: Eyebrow, smooth as braided silk and drawn with a fine pen, / an arch where my glance would perch and rest
The poem also builds on folk imagery, such as the metaphor of bird (“pouli”), a term of endearment with which mothers frequently address their male children: “The dead boy is a frail bird who has flown from the cage”; “his hands are folded like the wings of a sick bird.” In the example of “Epitaphios” modern poetry interfaces with ecclesiastical and folk traditions. Secular lamentations may be disappearing in Greece, but they acquire a new “life” in poetry and musical compositions. But this does not happen without controversy.
“Epitaphios” has been stigmatized “as dangerous and blasphemous,” and was included in a public book-burning event by the dictatorship of John Metaxas (1936-1940). For the Greek left, in contrast, it is a “slogan song.” It was performed, for example, outside a Salonica hospital in 1963 to mournfully protest the assassination of parliamentary deputy and pacifist Grigoris Lambrakis. Poetry and politics are often interwoven in Greece, and “Epitaphios” is not an exception.
Yiorgos Anagnostou
Credits for the translation and analysis: Rick M. Newton
Posted by Yiorgos Anagnostou – Γιώργος Αναγνώστου at 8:06 PM