Close Encounters from a Distance 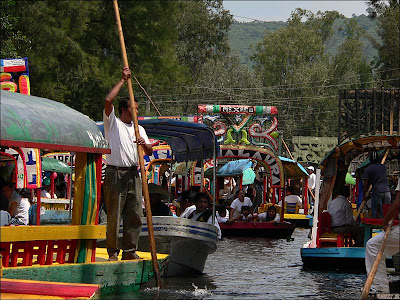 It is a common occurrence in the nightlife of U.S. cities, but also elsewhere. You see it in the limousines hired by youth, for instance, celebrating their prom. You cannot possibly miss it in restaurants either, most dramatically played out in fine dining establishments where the rules of polite conversation and discreet (or not so discreet) flirting reign.

It most lately commanded my sight in Xochimilco, Mexico City, a UNESCO World Heritage site. A brigade of colorfully decorated trajineras, wooden boats propelled by a lone boatsman with a long wooden pole, awaits the visitor. Embarking a trajinera will take you on a slow-pace navigation of an extraordinary maze of ancient canals. A good two-hour tour costs 400 pesos (about U.S.$35.00), drinks not included; guidebooks mention that musicians–the iconic mariachis–are available for hire, though there were not any when I visited, a cloudy Sunday afternoon.

I was overtaken by the power of the canals as an engineering feat when a youth from a trajinera passing us by jolted me out of my reverie. "You look bored!" (estan aburridos) he shouted to our group, taunting us to join his party. His friends, beer in hand, almost all dancing, many intimately displaying "amor" (a public sight so common in Mexico), glittered in the spectacle of youthful abandon to good times. We got a good look at each other, as our respective trajineras kept drifting apart, a long pole push after another.

Here it is! It starkly asserts itself in the limousine, in the restaurant, in the trajinera. The close proximity of those in leisure and those who labor to fuel enjoyment. A class of people with purchasing power and a class of people in the service industry, often in dire need. Locked in their inequality, so near yet so afar.

It requires a particular angle, it seems, to frame this pair in its structural relationship. It takes a certain distancing from the immediacy of its interaction–the eye contact, the civil exchanges, the expression of friendliness (genuine or otherwise), all kinds of furtive glancing–to capture its objective dimension.

For, once inside the frame, once a party reveler in the limousine, a charmer in the restaurant, an enthralled traveler in the trajinera, the leisure class and the laborers–no matter how closely they get to see each other–they are positioned to look elsewhere, to look differently even at the objects their gaze may mutually desire.