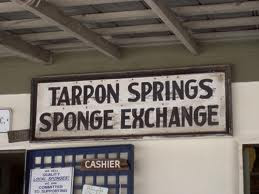 BBC discovered in America a politically self-innocuous explanation for the Greek economic crisis. The place was Tarpon Springs, Florida, and the sources were, well, local Greek Americans. A mere three individuals were interviewed, an old timer, a restaurant owner, and the local priest.
Here is the mini visual ethnography accompanied by a short commentary, entitled Greek Traditions Live on in Tarpon Springs. Let's take the time to watch the segment, all 5.10 minutes of it:
news.bbc.co.uk/2/hi/programmes/world_news_america/8882354.stm
A disturbing element in this piece is its economy of scale. A few individuals produce grand claims. There is no effort to correct this imbalance of acute disproportion, as the reporter makes no attempt to identify alternative points of view; he shows no interest in scaling down the generality of the claims. What is elicited from the few conveniently passes as the inviolate truth that applies to the whole.
Additional elements cause further uneasiness. The conspicuous absence of analysis in this reportage is particularly troubling given the ideologically loaded commentaries of the interviewees. The points of view of the "natives" are treated as transparent truths, as authentic gems of knowledge that need no further contextualization. Thus the segment simply features a Greek American who orientalizes the Greeks, citing "Greek laziness" as the root cause of the Greek crisis.
It is not that Greek society does not have its share of blame for the crisis. But indicting the Greeks as lazy–and for that matter offering laziness as the explanation for the problem–is dead wrong, a testament of the power of Orientalism among some Greek Americans. In offering this simplistic culturalist explanation to a complicated political and economic issue of a global scale, unreflective Greek Americans join the western chorus of singling out the Greeks as the exclusive culprits in this disaster. The BBC segment conveniently makes no gesture to trouble this picture.
The "film" not only underwrites Orientalism but hints of the Greek Americans of Tarpon Springs as the model for the Greeks of tomorrow.
The story line is unambiguous. Greek America in this locality is construed along two temporalities. One the one hand, the community has been preserving its past intact as in a time-capsule; there is a fundamental sameness between the time of immigration, about a century ago, and the present. In experiencing the ethnic enclave today one experiences the Greece of the past. Time has stuck in the 1900s which is seen as the base line of a "real Greece," exclusively preserved in Tarpon Springs. It is this static view of culture allowing the statement, "Greeks from Greece come here and say that this is Greece not [what you find in] Greece."
On the other hand, the community always finds itself in tune with changes in the host society, readily responding to American modernity. Greek Americans' work ethic is a "distinctly modern" trait they picked up in America. Even traditionalist women embrace Obama politics.
There no intersection between the two temporalities. One Greek American male can be, say, a feminist American and at the same time a traditional patriarch; or an advocate of modernity and a devout traditionalist; all this with no trace of irony whatsoever.
Greek America is then simultaneously construed as a static entity encapsulating an essential Greekness and a dynamic one fully galloping through the contemporary western landscape to harvest its bounty. The hyphen is bifurcated: The Greek component directs itself toward the past, which comprises a set of eternal traditional values worth preserving. The American component is forward looking, introducing layers of modernity, improving the Greek, turning the ethnic into a contemporary subject.
This model of identity limits agency among the Greeks. It cannot account for a Greek identity acting upon tradition and reinventing it, mixing codes, or defining itself outside the contours of tradition. A Greek in this formulation is relegated to reproducing tradition, preserving intact what is already available. And, since Greek identity is inescapably defined by the past, a desirable contemporary Greek is one who imitates the West. A Greek needs a western hyphen in order to claim contemporaneity.
And in its conclusion the segment winks at the viewer, if Greece is necessarily heading toward change, couldn't it be that the Greek Americans so construed serve as a mirror for its future image? Couldn't it be that this Greek America embodies the past and future of tomorrow's Greece?
(To be continued)
Posted by Yiorgos Anagnostou – Γιώργος Αναγνώστου at 5:29 AM