Review of "The Journey: The Greek American Dream" 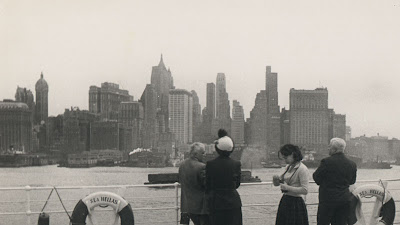 A work of compelling visual and audial power, The Journey: The Greek American Dream brings Greek American history to mass audiences by means of documentary film. This is public history of high professional caliber, a product of collaboration between award-winning filmmaker Maria Iliou and historian Alexander Kitroeff. The film comprises fragments from a vast visual archive and draws upon contemporary ethnographic recollections to produce its version of the immigrant and ethnic past. Firmly anchored in conventions of historical interpretation, The Journey nevertheless offers no pretense of objective neutrality. The mere invocation of cultural mythologies in its subtitle enmeshes the work in ideology at the very moment of its circulation. In this capacity it inevitably alerts reviewers not to lose sight of its interest in values, urging, that is, critical dialogue with its cultural politics.

The film poses a host of interpretive challenges. A well-researched and historically-informed piece, it raises questions about the reluctance of the filmmaker to probe more widely into the archive and to explore in more depth the issues that she addresses. An admirable work of evocative musical compositions, skillful editing, and artful visuality, it construes a poetic universe whose aesthetic voice distracts from or even competes with the ethnographic voices it hospitably features. One can readily enumerate an array of empirical oversights. Commentary alerts the viewer to the policy mistakes of Archibishop Iakovos (enthroned 1959–reposed 2005), for instance, yet the conflict over language that rocked the community under his reign remains out of sight. Images of war-ravaged Greek immigrants kissing American soil are given due visibility—a reminder that immigrant narratives stand in for national narratives; but counter-memories of deported and persecuted Greek Americans, victims of McCarthyism, and a reminder that nation-states discipline ethnicity are rendered invisible. There are also numerous instances of dissonance between ethnographic representations and corresponding visual referents. Recollections about an ancestral village located in the Peloponnesian interior, for example, are supplanted by images of a dramatic sea-side locale.

But merely to keep enumerating omitted facts is a convenient and ultimately fruitless enterprise. This is not only because the documentary must necessarily rely on partial representation in order to relate a 90-year (1890–1980) span of ethnic history within its alotted narrative time (a mere 87 minutes), but also primarily because any historical narrative, we now understand, is attached to questions of value and judgement. The obviousness of empirical omissions and poetic license in this work calls, therefore, for an alternative interpretive strategy beyond the trappings of empiricism. The critical task is not to count what is missing, but to account for why certain facts are missing. I ask in particular, why does the narra- tive understate or even omit mention of the far-reaching intraethnic clashes over the cultural, linguistic, educational, and political direction of post-1960s Greek America when multiculturalism brought these issues to the fore?

One of the reasons, I suggest, is that the filmmaker advances an argument for the public, namely the value of biculturalism. Her rhetorical strategy lies in eschewing debate on complex divisive issues, to endorse instead a preferred way of living. In other words, the option for a polyphonic representation of volatile issues (such as the function and effectiveness of the church in bilingual education) is bypassed in favor of advocating the value of a specific world view, “what ought to be.” The argument develops in a twofold manner. The documentary’s historical storyline lends authority to the enduring operation of a dual cultural affiliation in Greek America while its ethnographic and visual narratives call upon viewers to recognize the social, moral, and aesthetic value of biculturalism. In this respect, The Journey functions as a heritage narrative, making history while steering its course to underwrite a bicultural Greek American identity. The particular representational modes that it employs—the “expository,” the “performative,” and the “poetic” (terms I borrow from documentary studies)—work synergistically to demonstrate this position.

The expository mode consists of commentary, titles, and supporting visual evidence—still photographs from an array of private and public collections as well as period film footage—to substantiate the historical argument. It arranges the past in three periods: “Immigrants” (1890–1920), “Becoming Americans” (1920–1960), and “The Revival of Ethnicity” (1960–1980). Utilizing the voice- of-authority of professional historians and researchers (they can be heard and also seen), the narrative establishes the presence of bicultural (transnational or ethnic/diasporic) affiliation in Greek America in all three periods. First, the Balkan wars may have rallied immigrants on behalf of Greece, but the determination to re-emigrate at the conclusion of the fighting also underlined the immigrants’ nascent rooting in America. Second, World War II fueled Greek pride in assimilationist America, enabling the visibility of a Greek American identity and mobilizing the community in war relief activities. And third, the political response to the Cyprus issue demonstrated amply, in the words of the narrator, historian Alexander Kitroeff, an example of Greek Americans “thinking in their hearts as Greeks but in their minds as Americans.” In this line of argumentation the filmmaker undertakes a drastic revision of Greek American historiography, departing from the authoritative model of Greek America as an American ethnicity to rewrite Greek America convincingly as a transnational entity.

If the expository mode lends credibility to the transnational model, the performative mode renders visible the contemporary relevance of biculturalism. In its performative mode the documentary features ethnographic recollections of individuals who recount familial memories and narrate their own subjectivities. Accomplished politicians, novelists, poets/translators, researchers, and academics—including scholars of modern Greek studies—underscore the complexity and paradoxes of experiencing ethnicity as they “perform” their biculturalism. On the one hand, the institutional position of these subjects implicitly declares their integration and cultural competence in American culture. On the other hand, their narratives underline interest in modern Greek learning, affective intergenerational ties, affinity with the classical past, and belonging to a local Greek Orthodox community. Moving away from narrating “history from below”; that is, history from the perspective of ordinary people—the documentary opens a space for accomplished “Greek Americans” to engage viewers directly with their own personal stories. Their telling values biculturalism. The United States empowers women, opens new prospects, and affords mobility—though the psychic cost of dislocation and fragmentation associated with migration can be enormous. At the same time, Greek culture, family, and ethnic community cultivate personal enrichment, belonging, pride, education, and affective empathy. Author and enterpreneur Elias Kulukundis praises biculturalism for fostering interrogation of social norms, and poet and translator Olga Broumas extols multilingualism for guarding against absolute truths.

If the expository and the performative modes declare and explain, the poetic mode hints and suggests. If the historical and ethnographic narratives navigate the viewer to interpret the social world, the poetic perspective composes a visual ode to the skyline of New York City, past and present. The camera lovingly scans this multisemantic space, offering aerial views of the urban panorama, zooming in on geometries of juxtaposition in the infrastructure, closing up on the city’s educational and natural monuments, attending to plays of reflections on the urban texture. Appearing in regular intervals, images of the urban spectacle rythmically punctuate narrative time. But while the camera monumentalizes this symbol of immigrant opportunity—this immigrant dreamscape—it remains absolutely reticent to probe its disturbing aspects. For, in this emblematically multicultural metropolis, differences also embroil ethnic peoples in conflict. Michel de Certeau starkly spoke about the “brutal opposition of races and styles” in the city, and The New York Times regularly covers deeply entrenched animosities among various groups. And even though interviewees in the documentary register personal memories in relation to these histories, the camera neglects the city’s archive of conflicts between white ethnics and racial and religious communities, leaving unexamined the unequal power relations that have framed their historical encounters. The poetic mode privileges the aesthetic over the political, advancing the documentary’s overrid- ing argument, albeit in the most suggestive terms. In complex ways that I do not have time to elaborate here, the documentary imparts to the viewer an aesthetic view of history, one privileging the sublime. The Greek American journey toward inhabiting two worlds—the dream of inhabiting the hyphen—ultimately inspires awe and wonder. Embodying this multicultural dream, New York City becomes the camera’s epic hero. But this perspective elides the view of difference as a contested issue within Greek America, but also cross-culturally. Hence the docu- mentary does not (in fact cannot) narrate, say, the social forces contributing to the historical defeat of a thriving bilingual Greek America.

The Journey represents a truly transnational cultural production. Its sources of funding, venues of circulation, and networks of collaborators span the Atlantic. Funders include prominent Greek American philanthropists as well as The Stavros Niarchos Foundation, The Alexander S. Onassis Public Benefit Foundation, and The National Bank of Greece. Prestigious institutions—The Boston Museum of Fine Arts, The Metropolitan Museum of Art, the American Film Institute, The Hellenic Parliament TV Channel, The Hellenic American Union, and Public Boadcast Television, among others—have hosted its screening. The Benaki Museum exhibited the archival photographs and a book featuring this material is available in Greek, with an English edition forthcoming. This is a work freighted with great cultural capital, enjoying wide access to multiple audiences. Its capacity to harness and build on multiple dominant discourses—the American valorization of white ethnicity as the template of the hyphen nation, the centrality of archival images in narrating immigration, Greek political interests in the achievements of the global “Greek diaspora,” and the xenitia discourse of loss and hardship—contribute no doubt to its transnational resonance and emotive power.

Where do we go from here? What is gained and what is lost once history is narrated as heritage for public consumption? The documentary invites critical reflection on the uses of electronic media to popularize ethnic history, strategies of representation, audience expectations and reception of ethnic narratives, the positioning of cultural producers vis-à-vis powerful ethnic and national narratives, the invocation of the Greek American example to effect changes in Greek society (the filmmaker has pointed to the Greek American experience as an argument for a multicultural Greece), as well as the institutional production, preservation, and circulation of the ethnic archive (The Proteus Archive Preservation Project was established in the process of making the documentary). Highly mediated by dominant discourses, The Journey has sparked institutional and popular interest in Greek America while managing to capture our era’s transnational zeitgeist. Its historical intervention in the interests of bilingualism and biculturalism requires full recognition. Still, urgent questions linger. Will there be a community of filmmakers who will negotiate this cultural capital to further the visual exploration of Greek America? What kind of funding and distribution resources will be available for works that cast a genuine look at issues confronting Greek America or venture to explore non-canonical journeys meandering its landscape? What are the audiences for these projects? And what is the function of modern Greek studies scholars in this enterprise? Cultivating a socially engaged tradition of Greek American documentary hinges upon the resolute determination of various constituencies to explore stories that matter to them in their full ethnographic complexity.