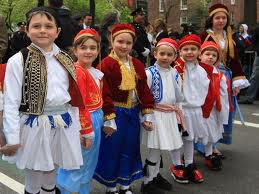 This essay was originally published under the title "What Exactly Does it Mean to Be a Greek American?" in the National Herald Online, November 3, 2011